With the opening of Panther Creek High School and Minett Elementary School next fall, the District makes plans to rezone schools in Frisco ISD. 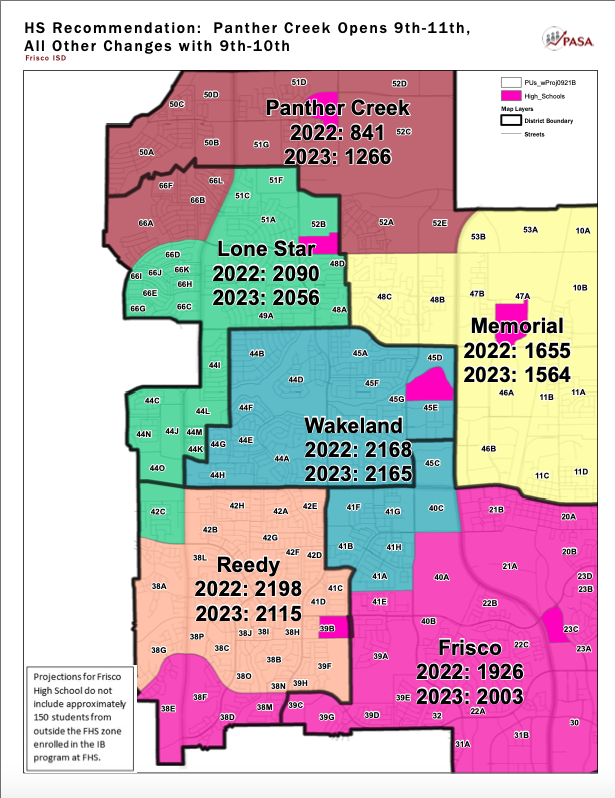 FISD proposes new potential school zones. With the upcoming 2022-2023 school year, FISD will be making changes to school zones to prevent overcrowding in schools, as well as add students to the new schools that will open next fall.

Within Frisco ISD, there are 11 high schools, 17 middle schools, 42 elementary schools, as well as 3 special programs schools. Minett Elementary School and Panther Creek High School will be added to that list in the fall of 2022.

“The Frisco ISD has repeatedly reaffirmed its desire for smaller high schools that provide a wealth of opportunities and experiences for students, academically, artistically, and athletically,” Wassam said.

FISD’s goal is to provide schools with well-rounded programs, as well as leaving room for growth and preventing overcrowding in schools.

On Oct. 12, the District proposed new zones for all the schools.

Some students from Reedy were also proposed to be moved to Lone Star and Frisco High School.

The District also proposed to move some students from Frisco to Wakeland.

“The District reviewed countless versions before the proposal that was presented at the Board meeting on Oct. 12,” Wassam said.

According to friscoisd.org, the District will be trying to make sure “all FISD high school campuses remain under the University Interscholastic League (UIL) cutoff for 5A schools”.

“Decisions regarding rezoning are based on what is best for students, campuses, and the District as a whole,” Wassam said.

When making zone changes, the District considers how to impact as few students as possible within attendance boundaries, how to effectively utilize classroom space, balance enrollment, provide stability to growing attendance, and promote student opportunities.

“The District has received hundreds of communications from the community via email and phone. Every single email that has been sent has been read. We received emails from parents who were happy with the proposed boundaries, while others expressed concerns about their communities, families, or the unique situations of their child,” Wassam said.

On Nov. 8, the District will be reviewing suggestions from the community and Board members, who will be presented a version of zones they will vote on.